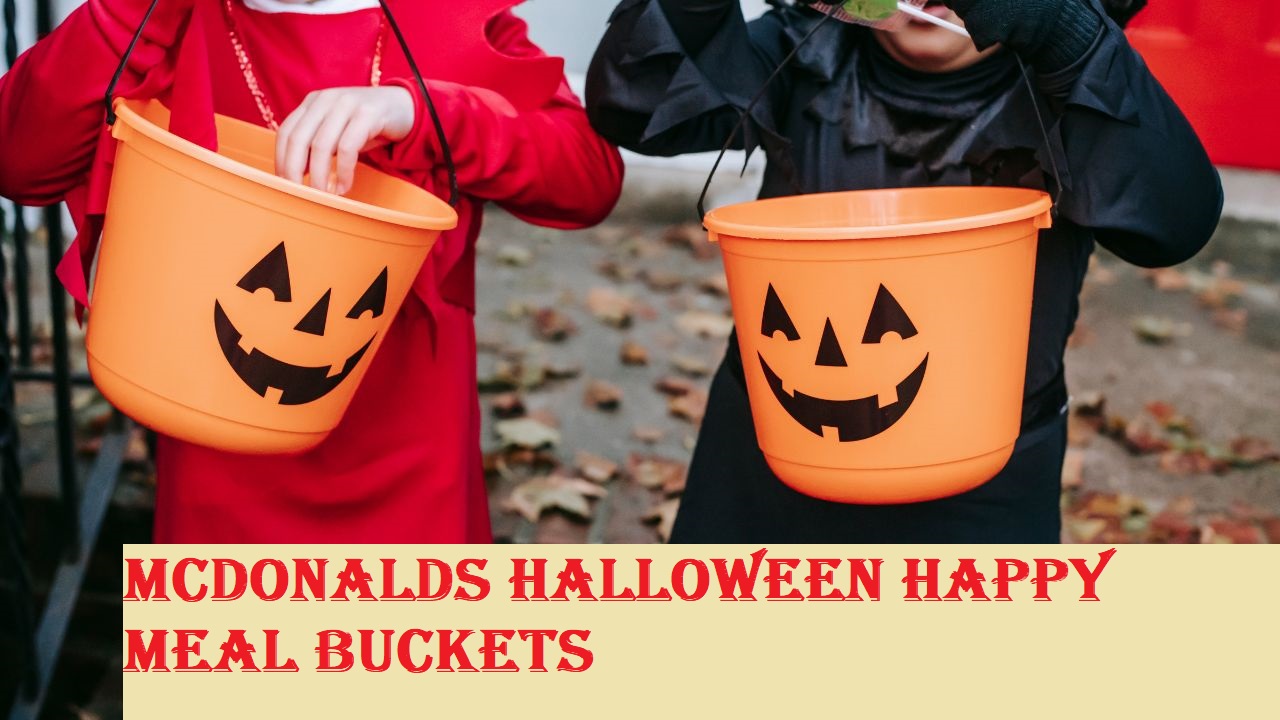 Almost everyone has fond childhood memories of receiving McDonald’s Happy Meals. If I was good at the doctor’s office or if I was good for the evening, my parents would take me.

In other words, the popularity of the Happy Meal was proportional to the interest in the featured toy. The Happy Meal Halloween pails became an instant classic that year. It wasn’t a toy, and it was much too small to use for trick-or-treating.

But they were perfect for stowing away Halloween loot and had a certain something about them that made them feel like they belonged in the holiday season. Back in 1986, manufacturers brought us the original Halloween buckets.

They looked like standard orange pumpkin buckets and offered in three distinct variations: the McPunk’n, a take on the classic jack-o’-lantern design; the McBoo, a more ghostly take on the pumpkin motif; and the McGoblin, the “scariest” of the bunch.

Due to high demand, pumpkin pails produced again the following season. Before making a comeback in 1989 with a brand new design, the pails went on hiatus in 1988.

It wasn’t just pumpkins in the 1989 crates. McBoo was back, but this time with a new and improved look, and he brought along McGhost and McWitch as companions.

The ghost had the same pumpkin-like shape as before, but it was white and had a blank white “ghostly” face. McWitch was a green witch who had a spider in her hair. She also wore the lid of a witch’s hat, which was pointed.

What Are The McDonald’s Happy Meal Buckets?

A couple of years later, McDonald’s completed its spooky lineup with a green witch and white ghost design. These adorable buckets cycled in and out of fashion up until 2016 or so when they finally faded away for good.

Nonetheless, blogger @markie devo claims that the Halloween buckets are making a comeback.

Screenshots purporting to be from McDonald’s have surfaced, announcing their return and showing the updated buckets for 2022, but the fast food giant has been mum on the matter. We hope against hope that these are genuine.

When Can I Get Them?

An image captured by Nightmare Nostalgia on October 18, 2022, shows that these buckets will be for sale on that day.

A McDonald’s connection to the calendar has been rumored but not confirmed. Check the McDonald’s social media pages (Instagram and Twitter) and your local McDonald’s for updates.

In addition to your Happy Meal, you should definitely get some extra McDonald’s fries because they are, in fact, the best fries in the world.

The above-mentioned trio made their first wide-scale appearance in 1986. The promotion’s massive success ensured that it would revived, and it —this Happy Meal set one of the few that McDonald’s brought back periodically throughout the rest of the 1980s and into the 1990s.

Even though later sets featured a wider variety of colors and “characters,” I’ve always preferred the classic orange figures. It Halloween playthings as they meant to: simple and unadulterated.

(Many eateries, I seem to remember, serve meals in plastic buckets, soda not included. In a matter of seconds, the plastic would permanently infused with the delicious odor of McDonald’s.

It’s the epitome of a hidden perk!) Although I doubt McDonald’s advertised this feature, the pails frequently used for trick-or-treating. Carrying one of these would look a lot more awkward than a pillowcase or a ShopRite bag.

To be honest, the pails were only suitable for this purpose if you were an extremely young child whose chaperoned travels never extended further than a couple of blocks. Not enough sweets could fit in them for the rest of us. Nobody wanted a downer on Halloween because it was a popularity contest.

The Happy Meal did not pioneer the custom of including cheap trinkets with kids’ meals. In 1979. When McDonald’s first introduced the Happy Meal, the included toys were either a McDoodle stencil, McWrist wallet, ID bracelet, puzzle lock, spinning top, or eraser shaped like a McDonald’s character.

In Canada, before the Happy Meal introduced, there a promotion called “Treat of the Week,” during which a different toy offered for free upon request every week.

After the Happy Meal introduced in 1979, the promotion continued, and the toys included in the meals gotten fancier and fancier as time gone on.

Toys have evolved from simple items like a Frisbee or ball to more complex ones that often have a tie-in to a popular media franchise such as a TV show, movie, video game, or toy line.

When did McDonald’s do Halloween buckets come out?

A treat and a victory! During the month of October in 1965, McDonald’s restaurants across the country were getting ready to roll out their biggest fall promotion: Halloween.

What was the very first Happy Meal toy?

1979. The concept of the “Happy Meal” was initiated. The circus-themed box contained french fries, cookies, a soda, and a toy. McDoodler stencils, McWrist wallets, bracelets, puzzles, erasers, and spinning tops were some of the playthings on offer.